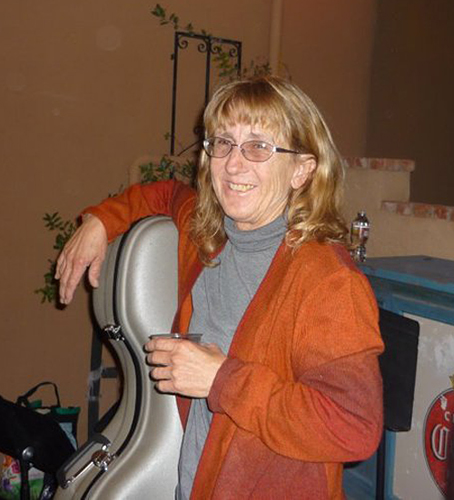 For about four decades, Alison Reynolds, founder and one fourth of local cello ensemble La Cella Bella, has been writing, arranging and performing the kind of music that makes people sit up and take notice.

It was an obsession that started early. Born in El Paso to a theater teacher and a homemaker, Reynolds picked up the cello for the first time in fourth grade and the two have been making beautiful music together ever since.

“I was nine years old at the time,” she said. “My sisters played violin and viola respectively and they wanted me to play cello. I didn’t even know what it was, but I did it. I guess the cello and I just connected somehow and I never stopped.”

Soon after that auspicious beginning, Reynolds’ family moved to Canada, where she spent her formative years immersing herself in the music scene. Shortly after graduating from high school in North Bay, Ontario, she began her musical career as half of a folk duo in Toronto with musical partner Pat Watson called, apprpropriately enough, Watson and Reynolds. Soon after that, Reynolds and Watson met David Bowen and the duo became a trio. The result, Mirth, would be Reynold’s first flirtation with musical success.

The band released its first and only album, First Borne, in 1977, which gained a lot of attention for the group. The single, “Look To Your Soul,” written and sung by Reynolds, became an instant hit. Mirth dissolved not long after and Reynolds found herself moving back to El Paso in order to be close to her mother and continue her education at the University of Texas at El Paso.

The music had invaded her soul, however, and she quickly found herself doing solo gigs and working with such varied groups as the El Paso Convention and Visitor’s Bureau band, created to promote the area, and another band named Tularosa. All that began to change when she met Michael Ferguson, who she married in 1983.

“I continued playing for a while, but after that I kind of took a break from music to raise my kids,” she said. “I really didn’t do anything creatively until they were out of high school. Maybe 15 years… something like that.”

Though she claims to have no regrets connected to the hiatus, she does admit to missing the music “a little.”

“I don’t think I realized how much I missed it until my kids were all grown up and they didn’t need me anymore,” she said. “Empty nest kind of settled in and that’s when I decided I really needed to do something creative. That became La Cella Bella.”

In 2004, Reynolds teamed up with fellow cellists Debbie Eckles, Tatianna Dickens and Lynn Schuck to explore their musical boundaries. Far from being a simple chamber ensemble, however, La Cella Bella quickly found their niche; creating their own arrangements to well-known songs. Some of their choices were unusual by any standard – the Beatles, Nirvana, Green Day and Metallica amongst them – but it was this decision more than anything that solidified their standing as a premiere musical group and gained them instant recognition. Still, success wasn’t without its bumps.

Schuck departed the band in 2005 and was quickly replaced by Amy Muise, who also left in 2008 and was replaced by Alicia Dolen. The group crystallized and has been together ever since, though they find it harder and harder to balance their busy lives with concert engagements. Dickens home schools her children and has written a book, titled “Accept No Autism.”  Eckles was a violinist for the Las Cruces Symphony for 22 years and now plays viola with the New Horizons Symphony Orchestra. Dolen lives in Alamogordo, plays with the El Paso Symphony, the Las Cruces Symphony and makes and sells her own silver jewelry. As a result, Reynolds occasionally has to call in alternate players Norma Martinez and Erika Wright, when the key members of the group can’t coincide their busy schedules.

That is just one of the reasons it took seven years for the group to release a collection of their work. In 2011, they released not one, but two cds. The first Dreaming, came out in November of that year and features five original pieces written by Reynolds, offset by covers of recognizable tunes by such artists as The Eurythmics, the Doors, Blondie, Leonard Cohen and Jason Mraz. The second, Christmas and Other Joyful Tunes, was released in December.

Since then, doors have been opening for La Cella Bella and for Reynolds herself. The band has been picking up more and more engagements, while Reynolds has been hard at work on a project with an old friend from Canada, a filmmaker named Peter Ramsey who has contracted her to create the soundtrack for a documentary tentatively entitled, Whiskey Ship.

When not working on those projects, she has also been lending a bow to fellow musicians like Randy Granger, Chris Baker and country singer John Michael, by playing as a guest artist on their recent musical releases. She’s also put together a duo with Aaron Barbara called Windfall, which has begun to make a name for itself in local venues. To tie it all together, she has just celebrated her 30th anniversary married to “the most amazing, supportive man I have ever known.”

It’s a very exciting time for Reynolds, one marked by a fresh burst of creativity which she attributes to one simple, universal truth.

“I’ve never stopped making music,” she said. “I don’t think I ever will. It’s always going to be there. If you’re a real musician, it’s always in your heart. You might take a break, and sometimes you need that break to come back fresh, but if you love what you do, it will always be there for you.”