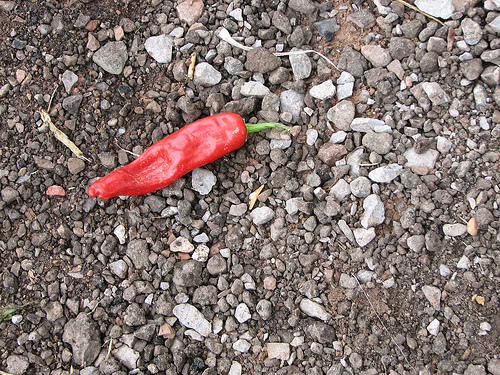 If you’re a native or have lived here for any length of time, chances are pretty good you didn’t really have to think about it. If I had to guess, probabilities are good that it was either red or green chile. It could also have been beef, pecans, pistachios, blue corn, or even wine, but chile would definitely top the list.

Why? Because, chile has been called the heart and soul of New Mexico. Just as Washington has its apples, Idaho its potatoes and Florida it’s oranges, New Mexico loves its chile.

The reasons for that are many, though most of the blame falls on foreign competition due to the landmark North American Free Trade Agreement (NAFTA), which in 1994 slashed tariffs on products moving to and from the United States.

The problems mounted from there. Today, reduced regulations and cheap labor are making it much easier to grow chile in Mexico than it is in the highly regulated United States. The same is true of China. In fact, according to the New Mexico Chile Association (NMCA), China is currently trying to corner the oleoresin market, which accounts for 30 percent of New Mexico chile acreage. Oleoresins are an essential ingredient of pepper sprays and mace.

As dire as all that sounds, however, one cannot discount consumer demand. The rest of the world may be okay with getting their chile fix from Mexico, China or even Texas, but here in New Mexico, if it isn’t grown here, it isn’t worth eating.

As somebody who spent 25 years living outside the land of my birth, I can tell you, there is no substitute. It’s as integral a part of my being as cheese is to a native of Wisconsin. You may be able to get it elsewhere, but it’s never really the same, is it?

I sort of count on there always being enough chile grown in this state to satisfy my appetites and the appetites of those lucky few I’ve turned to the spice side. I’m sure I’m not the only one. In fact, I know I’m not. State policy makers have been doing their part to ensure my attitude-altering comestible of choice is always available and properly labeled.

In 2000, the NMDA developed the “New Mexico – Taste the Tradition” and “New Mexico – Grown with Tradition” logos, to help identify and promote all New Mexico agricultural products, including food, fiber, wine, produce, nuts and livestock.

Even better, as of April 2011 the Hatch Chile Law has been making it harder for outside forces to violate trademarks associated with our beloved vegetable. Calling it “the most popular law to pass since I took the position,” Secretary of Agriculture for the state of New Mexico Jeff Witte says that it’s the consumers themselves who have been the best at policing the injunction.

“Consumers have been wonderful,” he said in a recent interview. “That’s where we get most of our complaints. It’s almost like a contest to find New Mexico chile products that are mislabeled. There’s a lot of pride in this state. That’s why I love this job. Everybody loves our New Mexico food products!”

Now, in an effort to help draw attention to the unique place food occupies in the hearts and minds of New Mexicans, the NMDA has come up with a contest that will reward consumers for buying not just chile, but all New Mexico grown and made food and beverages. All one needs to do is buy at least $20 worth of local products and submit the receipt to the NMDA. Doing so allows the consumer a chance to win a “party in a bag” containing local foods, drinks and other goodies, just in time for the holidays.

Contest participants can be entered a second time by snapping a picture of the local food and drink purchased and posting it to NMDA’s Facebook page. Four bags, valued at approximately $75 each, will be awarded: one before Thanksgiving, one before Christmas, one before New Year’s Eve and the last before Valentine’s Day. And, because we’re not nearly as insular as some seem to think we are, the contest is open not just to New Mexicans, but to savvy out-of state-residents, as well.

I don’t know about you, but this sounds like a smokin’ hot no-brainer to me. Viva New Mexico, let’s eat!

This article originally ran as an entry to my now defunct column in the Las Cruces Bulletin, on November 8, 2013. All rights reserved, obviously. At the time I wrote the article, it felt a bit like shilling (as so much about writing for a community newspaper tends to do), so I didn’t post it right away. Upon a second look I figured, why not shill for one of the best aspects about living in New Mexico? You gotta love where you live to truly be happy and I am definitely that. Besides, it gave me the opportunity to highlight a couple of the many photographs I recently posted to my Flickr site. Now THAT’S shilling!