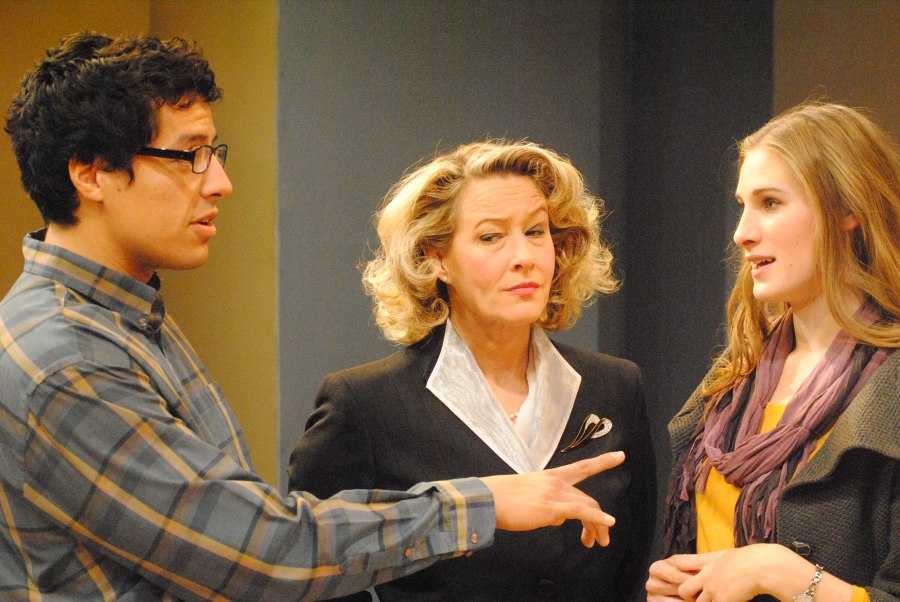 Both playwright Tom Smith and Director Mark Medoff have spoken at length about the themes that make up the former’s latest offering, Aunt Raini, currently being presented by American Southwest Theatre Company and performed at the New Mexico State University Center for the Arts. Art as political statement and the question of identity are key elements, make no mistake, but it is the humanity of the characters themselves that propel this powerful drama into the realm of exceptional theatrical experiences.

As a think piece, Aunt Raini raises questions that have haunted man since the beginning of recorded history. What is right and what is wrong? Who dictates those categories? And, at what point is involvement in a questionable cause, no matter how peripheral, an indication of personal belief?

There are certain beliefs that we hold to be true in our society. The subjugation of a people, no matter what their race, creed, culture or sexual orientation, by another, is considered wrong and ultimately informs the argument of accountability. It is a specter that haunts us to this day. Battles are waged and, eventually, rules are put in place. Laws are enacted. Decisions are made which dictate how we, as a society, will behave. It’s a never-ending parade of human folly.

Even so, once those laws are put in place, it doesn’t necessarily mean everybody agrees. There are always going to be those who see crimes against humanity as an inconsolable atrocity. It isn’t enough for the powers-that-be to declare a winner in the high-stakes game of tolerance and conviction. Involvement becomes the issue. How involved was the person, or people, in question. And how absolved should they be, once the ruling has been passed?

It’s a sticky wicket, to be sure. Arguments can be made on both sides and have been. Aunt Raini continues that tradition of looking at all angles of an argument, presenting the issues and leaving them in the minds of the audience to discuss and digest. Smith’s use of a real historical figure, in this case the infamous documentarian Leni Riefenstahl, is the inspired decision that anchors the otherwise fictional storyline into its potently social context.

In all these aspects, Aunt Raini works marvelously well. As a stage play, however, it isn’t without its problems. The first act, in which the character of Aunt Raini is introduced, and discussions of art are raised, is a fascinating and well-balanced presentation of ideas. It helps that visiting Chicago actress Stephanie Monday virtually owns the stage from the moment she is introduced until her literal last gasp upon it.

She is a wonder to behold, embodying both the character and the burden of history that weighs her down. She is crotchety, imperious and opinionated, but never mean and her body language conveys this perfectly. She has very strong beliefs about art and its place in society. She is also very honest, to a fault, but more often than not, the audience can agree with her assessment of the situation at hand. In that way, she becomes not simply a plot device, but the embodiment of the very arguments under discussion.

Unfortunately, that discussion reaches a crescendo in act two that becomes almost shrill at times. The character of Joel – played with a certain amiable nobility in the first act by Aaron Hernandez – becomes the mouthpiece for the opposition in the second and, in doing so, affects the distasteful demeanor of self-righteousness. Even from a cultural standpoint, his inability to see past his own argument automatically turns it into a didactic paradigm.

His rejection of Katherine, Raini’s niece and the one most affected by the events unfolding on the stage – played charmingly by Claire Koleske, though the actress does have a tendency to over-enunciate her consonants, making her delivery a bit stilted at times – is a red flag of intolerance. His reasoning appears clouded by emotion and judgment, leading one to wonder if he ever believed the philosophies he was spouting in the first act, much less whether or not he ever really cared for Katherine.

Adding to the issues of the second act is a somewhat confusing argument between Joel and the ghost of Raini. Because much of what is discussed there dictates the course of the eroding relationship between Joel and Katherine, it’s hard to distinguish between what is “real” and what is “imagined.” Does Joel actually see and acknowledge Raini’s ghost? Is his anger and self-righteousness on the topic of Raini’s guilt enough to make him suspend disbelief so that he can address her directly?

Or is the argument actually taking place between Joel and Katherine, who is acting as the mouthpiece for Raini? And if this is so, why is it that Joel spends so much time dancing across the stage with the ghost, while Katherine is relegated to the role of helpless spectator, fidgeting at the foot of the couch?

If not for the fact that the play was helmed by Mark Medoff, who has proven himself a master at pacing and making use of stage mechanics to convey kinetic emotion, it would almost appear to be a problem of stage direction. We all understand that Raini is dead, because Katherine announces it at the beginning of the second act, but the importance of the argument is unfortunately clouded by the question of how, exactly, that argument can be taking place.

Moving past that scene, however, the story is easily picked up and Katherine’s plight becomes center stage. She makes her decisions according to what she believes to be true, as does Joel. The argument is won by neither, but both are adversely affected by it. In this respect, the play succeeds by condemning neither side. Raini was who she was and lived her life unapologetically. Katherine takes strength from that conviction, while Joel sees nothing but duplicity and deception in her acceptance.

As a presentation of relevant ideas and themes, Aunt Raini succeeds on every level. Educated audience members would be very hard pressed not to find areas of discussion once the final bows are taken and that, in many ways, is what good theater is all about. If it sends the curious scurrying to Google and Wikipedia to learn more about the enigmatic figure central to the plot, all the better. History, like theatre, after all, is best served when it reminds us of our shortcomings, both as individuals and members of a constantly evolving society.

Performances of Aunt Raini continue through Sunday, March 9. Performance times are 7:30 p.m. Thursdays, Fridays and Saturdays and 2 p.m. Sundays. Tickets are $10-17 and available at the Center for the Arts box office Monday through Friday, between the hours of 12 and 4 p.m., through Ticketmaster, or by calling 646-4515. For more information, visit http://www.nmsutheatre.com