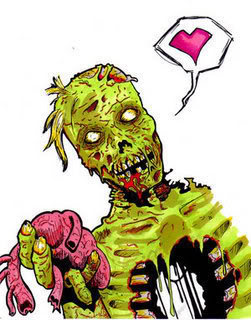 A mouth-watering little blast from the past (15 years to be exact!) to celebrate my favorite time of the year. Written under the pseudonym Stan Van Helsing and published in Playtime Magazine, October 1999. Pleasant screams…

Now, with the Internet taking on a more significant role in the scholarly quest for knowledge-without-effort, highlighted excerpts from this curious tome have been made readily available world-wide in the form of an updated series of Frequently Asked Questions (FAQs) concerning sex with zombies. What follows are but a sampling… 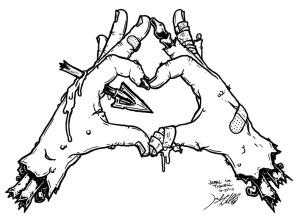 How do I find a zombie partner?

If a trip to Haiti is out of the question, try hanging out at your local morgue or cemetery. If you wait long enough, something is sure to come shambling by.

Aren’t zombies more interested in my brains than my body?

Well, sure, but that’s a taste thing. Some might argue that it is this very fact that makes a zombie such a desirable partner.

How do I get a zombie’s attention?

Step in front of it and wave your arms. If that doesn’t do the trick, try smacking it with a shovel.

Should I make the first move?

Yes, if you want any kind of move to be made at all. Zombie’s aren’t real quick on the uptake. Just reach out and grope it. This is an especially good idea if it is a particularly old zombie, as you’ll want to be sure those all-important vital parts are still intact and haven’t dropped off.

Where should we go to have sex?

Chances are the local Motel 6 will frown upon this type of activity. So, unless your parents or spouse are extremely understanding, you’re going to have to rough it. A nice fresh pile of dirt in the graveyard can be made quite comfortable. Or, if you’re really creative, you can bring along a blanket soaked in lavender, which you can then spread upon the ground under a stately, moss-covered tree. Candles and music will add a romantic touch to the proceedings. It won’t change the fact that you’re doing it with a zombie, but Martha Stewart would be so proud!

Am I big enough? Too big? The right shape?

For what? You’re humping a corpse! Do you really think it’s going to care?

Should I protect myself?

From what, dry rot?

Should I use some sort of lubricant?

Actually, that’s recommended, unless, of course, the idea of a “dry hump” really appeals to you.

As with everything, tastes vary, but the preferred position is with the undead lover flat on its back. Zombies don’t move very fast, so putting them in charge could take a while. Besides, you’ll want to be able to move quickly should your lover decide to administer love bites to your scalp.

Play it where it lays. Not all zombies are vertically inclined.

What if something breaks off?

If it’s an important piece of equipment, look for a substitute appendage or opening. Most zombies are very accommodating.

That really all depends on how quickly you can get in and out of the situation before your zombie lover decides to give you “head” in its own special way.

What if I release too soon?

So what? It’s not like a zombie has feelings to worry about. He or she is just happy to be used. See the preceding entry if guilt requires that you have an excuse for your quick trigger.

This article originally appeared in Playtime Magazine, October 1999, “The Ghoul Issue.” All rights are still preserved in formaldehyde.