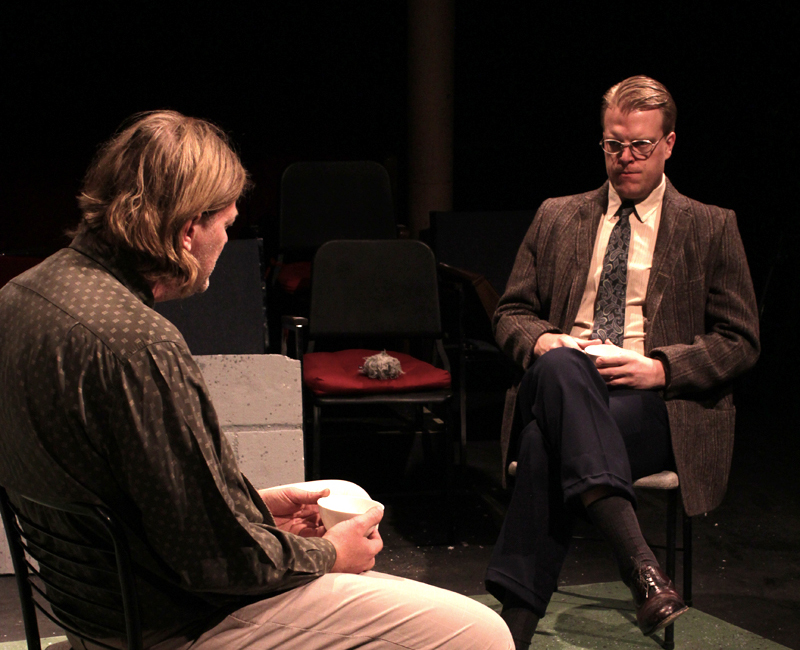 It’s an exciting time here in the downtown Las Cruces theater “district.” Even as we roll into the third and final weekend of performances for Harold Pinter’s The Hothouse, at the Black Box Theatre, we are in preparations for the One Act Play Festival, which will be presented at the same time down the street at the Las Cruces Community Theatre. Tonight is dress rehearsal for the one acts, and the only opportunity I will have to see my offering, The Real Thane, presented on stage.

It’s very exciting. Probably all the more so because it has been 20 years since that play was originally presented at Planet Earth Theatre in Phoenix. Almost 20 years exactly, give or take a few months. Having it presented by people I know – the director Erica is also stage manager for The Hothouse, my friend Autumn is doing costumes and the actors include fellow thespians I admire greatly – endows the experience with a more meaningful quality. Life really doesn’t get much better than this.

I just hope people come out to see the One Act Festival. One Act plays are a hard sell, here as anywhere. Which is a shame, really. For me, it’s a bit like reading a short story collection. Different voices, different energies. Some may make you laugh, others may make you cry, still others may give you food for thought. It’s a mixed bag and considering the talent we have here in our burgeoning hamlet, it’s an opportunity to sample some of the inventiveness of the area. One wouldn’t think that would be such a hard sell, but it is.

It’s no secret that audiences are dwindling for live entertainment. Having the world at our fingertips has changed the way we perceive it. Why get dressed up and go out, after all, when we can sit in our own home, wearing nothing but boxers and eating a whole bag of Cheetos while we watch the Metropolitan Opera perform at Lincoln Center, or Miley Cyrus twerk her way to infamy, over and over again?

Why? Because nothing beats watching it happen live. Nothing. Allow me to climb up onto my soapbox for a minute. It won’t take long. I’m not one given to protracted rants. I’d just like to make a point here.

When we spend all of our time plugged into our laptops or iPhones, what we’re getting is second-hand information. Recordings of somebody else’s experience. A moment frozen in time and reheated by the internet.

When we attend live theater, or a live concert, or any other form of public performance, on the other hand, we are taking part in a tradition that goes back centuries, to the beginning of civilization and the understanding of human nature. We are taking part in a ritual older than recorded history.

Even better, we’re having our very own experiences and creating memories that we can share with a select few, rather than the collective consciousness of the world-wide hive mind. There’s something to that, you know. Really. Just think about it for a minute, while I hop off the box.

Many of my cast and crew mates in The Hothouse will be attending the One Act Play Festival dress rehearsal tonight. Offering support and taking the opportunity presented us. Then it’s back down the street for four more performances of our own. So far, the word of mouth has been splendid. We’re hoping for decent crowds to close out this chapter of our amateur theater experience. We’re also hoping that attendance for the One Act Play Festival will be noteworthy. A lot of time and effort, by some very talented people, has gone into its preparation.

By Sunday evening, it will all be over and we’ll all be moving on to other projects. For myself, it has been a very long time since I’ve had so much creative energy swirling around me. I’ve missed it and I am supremely grateful for it. I’ve never been one to rest on laurels, but I do recognize the value of breathing it all in while it’s happening and manifesting that energy into future enterprise. Will it be another play? Will it be something a little more cinematic? Will I finally finish my novel? Will it be something altogether different? Most likely. For this weekend, however, the play’s the thing.

Or, as the bard said, “All the world’s a stage, and all the men and women merely players.” I’m playing my part. Won’t you, as audience members, play yours?

One thought on “Why Live Theatre?”