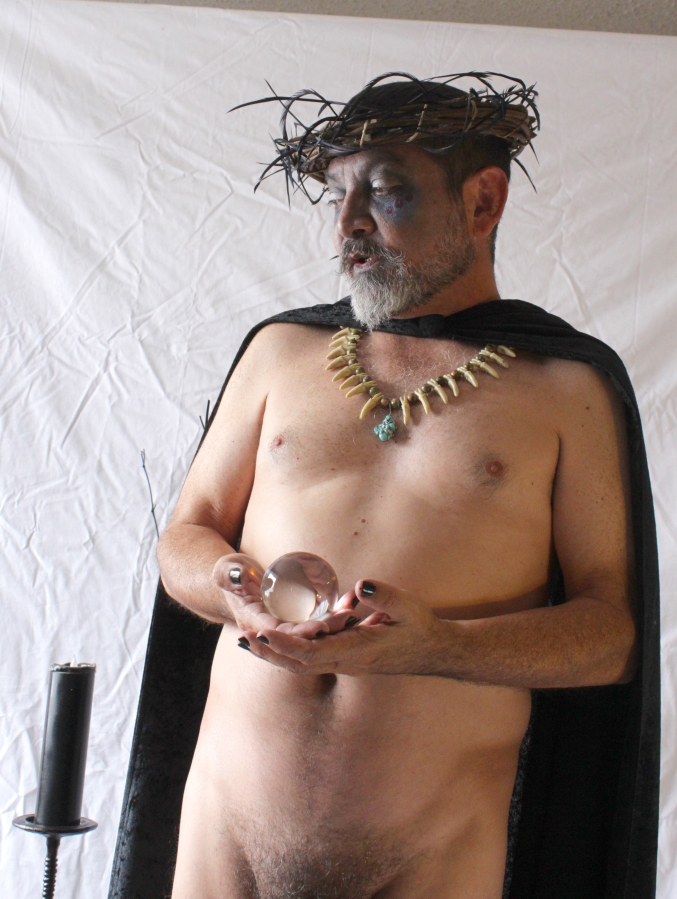 So, now I can check “become a model” off my bucket list. It was right up there next to “become a dernier cri” and “write a riveting autobiography” in the Probably Never Gonna Happen section. I’m kidding, of course. I don’t have a bucket list, but if I did, “become a model” wouldn’t rate very high. I just don’t have that kind of limelight personality. The modeling thing, on the other hand? That’s true.

It isn’t the first time I’ve shed my clothing for an artist, but it has been something like three decades since I last did it. Honestly, I believed those days were behind me. Leave it to one of my favorite artists, the effervescent and enormously talented Mollie Kellogg, to shatter that assumption.

Mollie and I have known each other since the early 90s, when she and her then husband Peter Cirino owned and operated Planet Earth Theatre, in what was then an all-but-abandoned downtown Phoenix. At the time, to those of us who squatted in the shadows of the boarded up buildings, making art in abandoned storefronts, dilapidated houses and long-vacated parking garages, they were bohemian royalty.

The Cirinos were mavericks. They weren’t interested in safe theater. They had no passion for drawing room comedies or angst-ridden pop dramas. Critics often used words like “gritty,” “shocking” and “unsettling” to describe the fare produced under their direction. They produced the kind of theater polite society steered clear of, featuring adult subject matter, raw language and worse… nudity! I was one of their willing subjects – an eager pawn for their brilliantly-staged passion plays – and I loved it.

Needless to say, we often played to packed houses in that dark little warehouse space, which gave new meaning to the term ‘black box.’ It was the center of our universe for a while, offering opportunities for those who found no comfort within the box.

We were often picketed, too, by those conservative hypocrites brave enough to venture into the ‘hood where transient artists plied their subversive trade. There was much gnashing of teeth and clutching of pearls back in those days and I, for one, was very happy to be a part of it all.

As with most meritorious moments, however, it couldn’t last forever. Browbeaten by the press, neglected by their slumlord and harassed by politicians seeking reelection via promises to “clean up” the streets of Phoenix, the Cirinos finally packed it up and moved to the more arts-oriented and liberally forgiving municipality of Seattle.

We who remained in the cultural wasteland were forced to find other venues. And we did. Times changed, downtown Phoenix was revitalized by sports complexes and bars, subversive became mainstream and the envelope was pushed even further, but it was never really the same. For years after, Planet Earth Theater would crop up in conversation, fondly remembered as ground zero for what later became a thriving alternative arts scene.

I even owned one of Mollie’s larger paintings for a time. A beautiful 12 x 12 foot distressed-canvas-on-found-wood-frame showpiece depicting two men entangled in an embrace, realized entirely in monochromatic blues. It had been one of three backdrops for the play I starred in called “Trafficking In Broken Hearts” and I displayed it proudly for close to 15 years. There’s even a photo of me sitting next to that painting, somewhere, shot by respected Phoenician photographer Marilyn Szabo, for an exhibit she put together celebrating downtown artists.

Unfortunately, that painting’s size proved to be its undoing. It was always fine, so long as I had a wall to hang it on, but storage proved difficult. I schlepped it around for years, giving it the care it deserved, many times making special trips to ensure its safety. Even so, eventually it fell victim to a very emotional breakup, inadequate storage and an unyielding stack of book boxes.

I grieved the loss of that painting. For me, as plans to leave Phoenix for good were being finalized, it was as if that chapter of my life had truly come to an end. The destruction of that last vestige from my innocent and far-too-trusting past became a symbol for the painful change taking place all around me. The kind of change that rips unceremoniously, leaving jagged, monochromatic shrapnel in its wake.

Fast forward a few more years to an otherwise unmemorable day, when I received a Facebook friend request from the lovely lady in question. Single now, she had built a life for herself and her kids in San Diego years before. Luck and the interconnectivity of the internet had led her to me in Las Cruces. Over the next few months, we chatted infrequently and played catch up by degrees. In the process, she reintroduced me to the wonderful world of her imaginative and vibrant figure paintings. I was enchanted all over again.

Then, one day, seemingly out of the blue, she asked me if I would be interested in modeling for her. I was gobsmacked. Really? Mollie works primarily in nudes and I was in my 50s, why would anybody want me to model? I told her as much, adding that I was very touched by the offer and very honestly honored.

Her response was pure Mollie. “Wow, that is so surprising. You are so charismatic and photogenic! I would be honored to break that streak.”

How does one say no to a request like that? Obviously, he doesn’t.

Of course, anybody who has known me for any length of time understands that nudity is part of the package. Fashion has never been something to which I pay a lot of attention. I’ll take body paint over frills any day. Still, except for the occasional holiday skinfest with dauntless friends, I’m usually behind the camera, not before it.

My last exposure to this sort of thing was as a nude model for the art department at NMSU in the early 80s. I was in demand, back then, and made good money at it. Ah, but 30 years can do a lot to change that perspective. Even so, I said yes and spent a few days obsessing over the possibility before finally just letting it unfold naturally.

However, as such things often happen, time passed and I didn’t hear anything from Mollie, so I chalked it up to passing fancy and went on with my life. It was enough that an artist I respected and whose work I enjoy had posed the question. Because I try to live my life pragmatically – expect nothing and one is rarely disappointed – I didn’t really anticipate another discussion on the subject. The logistics alone were beyond me. In my current state of financial inconstancy, trips to San Diego, even for a weekend, are the stuff of pipedreams.

Then, in the final days of December 2014, I received another message from Mollie. Was I ready? I faltered, explaining the logistical issues to her apologetically. Not a problem, she replied, having run into similar circumstances with a friend in Phoenix not long before. We discussed what she had in mind and worked out a plan to do our collaboration long distance.

I didn’t dwell on the logistics long. If she believed it was possible, who was I to argue? I certainly wasn’t adverse to the idea, though I had never done anything on this scale before. Still, how does one go about modeling for a painting by an artist who lives 700 miles away?

Photography, of course, with a liberal dose of the very internet connectivity that had brought us together again after so many years. Mollie gave me the background for the series she was working on and sketched out what she wanted from me. I had a lot of questions and she was, characteristically, very patient.

I assembled the necessary props, costume accessories and make-up and on a Saturday morning in early January, we made it happen. She stood by in San Diego, waiting for proofs, while my partner Donny acted as set stylist and our friend Danny Wade very gamely snapped pictures of me in the back room of our house here in Las Cruces.

We uploaded the first set and sent the proofs over. Mollie critiqued them and made suggestions. We did another batch and sent them over. She narrowed the choices down to the poses she liked best and so on. We pared them down further and within four hours we had a final. It was done. I had accomplished my first modeling assignment in over 30 years.

Even better, it had been a lot of fun. And why not? We laughed, drank mimosas and pretended to be artistes for half a day.

So now, here we are. It took me a while to go through all of the photos taken on that day. Donny had used my camera to snap a few “behind-the-scenes” images when his services as pro bono art director were no longer required. Danny had shot well over 200 pictures. At first I figured they would all go into a folder as documentation of yet another unusual day in the life, but while I was looking through them, I realized that, though I may have been the model, the real artistry was happening behind the cameras. There were some really interesting shots taken that day. Why not share them?

Why indeed. Here then, for those who stuck it out this far, are some of the more compelling – though less exposed (you’re welcome) – images from that day. We’re all waiting patiently to see how the painting itself comes out, but in the meantime, these are our record of artistic collaboration between friends. Yet another example of how life is what we make of it and, by default, is only dull if we allow ourselves to believe it so.

Oh, and bucket lists? Not something you want to take for granted, whether you actually keep one, or not…